Five strangers on a cruise yacht shrouded in fog amuse themselves by peering through the viewing lens of an antique movie projector. But each is shown a horrific story involving their occupational relationship with animals.

A bullfighter seeks to escape a witch’s curse.
A research doctor is stalked by a vengeful lab specimen.
A hunter becomes the hunted in a duel with a snake.
A zookeeper discovers a terrifying new exhibit.
A fashion designer battles a ferocious adversary.

Is it illusion, nightmare, or Fate?

JAWS OF THE GODFATHER

New book is here!
This is my second one with an underwater monster theme. This will probably be my last urban contemporary one for a while.

The Devil made him an offer he couldn’t refuse.
A notorious gangster is assassinated by members of his own crime family. But those who betrayed him begin to die in mysterious and gruesome ways near the ocean. An investigative reporter follows the blood trail to the startling truth:

Don Malvozzi slept with the fishes. Now he’s awake and hungry as Hell.

Jaws of the Godfather

Mutations of the Forbidden Zone

New book is out.

Fantastic evil awaits unwary trespassers in the ruins of a deserted military outpost.

An archeology professor and his students embark upon a digging expedition in Nevada. But when his favorite pupil learns that he has been planting artifacts to boost his academic fortunes and vows to report him, he diverts their schedule to explore an old mining shaft in the foothills, hoping to use the distraction to persuade her to reconsider.
Emerging from the opposite end of a tunnel, they find a derelict airbase, seemingly abandoned since World War 2. The group branches out to investigate the site and are attacked by savage creatures up to fifty feet in height, forcing the survivors to run for shelter within the hillside caverns where a mysterious stranger awaits them. The star student finds herself caught in a desperate struggle between her former mentor’s determination to protect his interests and the colossal monsters of nuclear nightmare.

New book out (following good response for THE SHARK MEN).
This one is inspired by urban siege/suspense like Assault on Precinct 13/They Live and Fitz James O’Brien’s short story What Was It? A Mystery.

Can you trust a shadow?

“On a sunny morning three homeless residents of an abandoned industrial park discover the corpse of a man lying on the pavement with a notebook of strange physics formulas. To the horror of the surviving witness, touching the remains causes two of them to instantly disintegrate into skeletons, their flesh chewed off the bone in seconds. Soon, a pair of drug dealers, two prostitutes and their pimp, three college students, a real estate agent and his assistant, and other vagrants of the inner city slum converge on the desolate territory and make the terrible discovery that they cannot leave. Any attempt to cross the shadows that ring the outermost boundary of the city block leads to instant death, for invisible monsters lurk in the absence of light along the decrepit buildings and fences, devouring those who try to flee.
To add to their dread, they only have until the setting of the sun to find a way to escape, before the entire territory of their phantom prison is swept over with the fatal darkness.”

Finally, a new book is out. This is a novella based on an idea inspired by 1970s ecology horror movies like FROGS! and SHOCK WAVES.

“A group of tourists head into an uncharted region of Brazilian forest. Beyond a fence of jungle vegetation they discover a concrete island in the center of an artificial lake. Using a derelict boat to cross the murky water, they are attacked by ravenous aquatic predators.

An elderly stranger appears, taking the survivors into his secret fortress, a former military research station. He reveals that he has created a breed of half man, half shark mutations, and his guests will be fed to the specimens to satisfy their hunger.

The tourists imprison the deranged scientist and seek a means of escape. But can they survive against creatures who possess the most lethal traits of shark and man?” 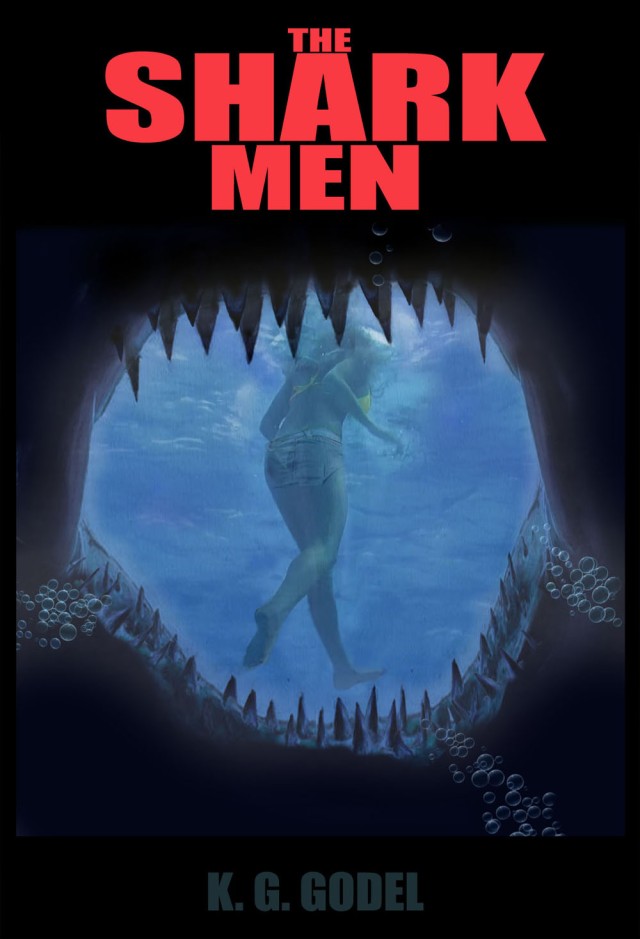 I was interviewed by Hollywood North Magazine about my Azzam and Korkon book trailers.

Book Trailer for Korkon and the Demon

Korkon and the Demon sword and sorcery book trailer (Harryhausen movie style) from KGodel on Vimeo.

A formidable demonic opponent for the demon of Korkon.

Or more accurately a section of it (or him or them).

Been busy behind the scenes working on the book trailer for Korkon and the Demon.  One shot left.  This is one of the casualties of the process.

Korkon’s 30 foot demonic guardian in a shot from the 2 minute trailer coming soon.